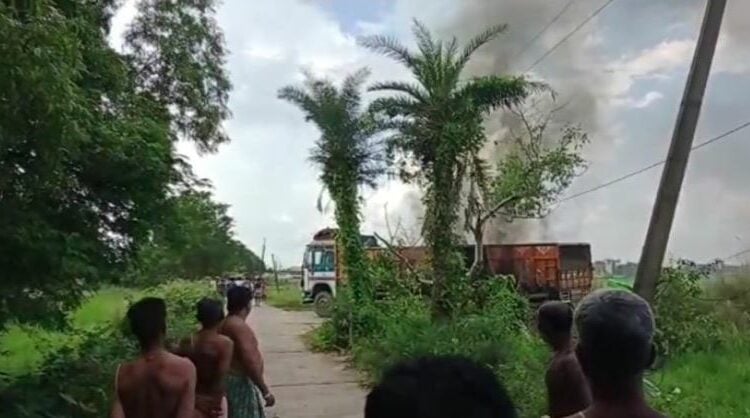 Jajpur: In a tragic incident, a truck driver has been electrocuted to death, as the truck which he was driving came in contact with a 11kV electric wire near a toll plaza adjacent to Singada square under Panikoili police station limits here in Odisha today.

The deceased driver has been identified as Suresh Kumar Das.

According to reports, Suresh was moving through Singada village after unloading goods from his truck.

While moving, the truck came in contact with a 11kV electric wire, which was hanging on the way.

As a result, the truck along with Suresh in it got electrocuted and immediately the truck caught fire. Besides, leaving Suresh with critical injures following the deadly electric shock from the live wire.

Soon, the villagers came to the aid, rescued Suresh from the truck  and sent him to District Headquarter Hospital (DHH) for treatment in a critical condition.

However, he was declared dead by the doctors of the hospital.

In the meantime, the police has reached the spot, seized the vehicle and initiated a probe into the matter.

Ultraviolette F77 electric motorcycle to launch in November 2022, Check details about it