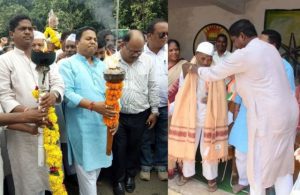 Nabarangpur: Thousands of people led by SC & ST Minister Ramesh Chandra Majhi on Thursday assembled at Papadahandi village in this district to pay homage to the 19 freedom fighters gunned down by the British police forces on the Turi river bank on this day of August 1942 during the Quit India Movement.

Freedom fighter Mohammad Baazi, the lone survivor of the 1942 massacre, as well as  the family members of the martyrs and some freedom fighters in the district were also felicitated on the occasion.

Addressing the gathering, Majhi said the sacrifice made by the freedom fighters of our region would inspire the younger generation to fight against injustice, corruption and superstition prevailing in the contemporary society.

Earlier today, a torch rally in memory of the martyrs was taken out from Papadahandi village to the Saheed Minar located on the banks of Turi river. A special puja was also conducted on the river bank to pray for the martyrs.

The district administration organised several functions to at the Saheed Minar, near the river bank, to mark the occasion. Dabugam MLA Bhujabala Majhi, former MLA Sadan Naik, Saheed Smruti Sansad President Manaranjan Tripathy, and a number of descendants of freedom fighters of this region were present on the occasion.

On 24 August, 1942, British police opened fired on freedom fighters at the Turi river bridge without giving them any prior warning while the latter were marching towards Papadahandi to attend a meeting on Gandhiji’s call for a Quit India Movement. Eleven persons died on the spot and eight others succumbed at the Nabarangpur hospital later. Hundreds of innocent people jumped into the river out of fear and got injured.

The incident has been marked as the biggest massacre by the British police, next only to the Jallianwala Bagh massacre during the freedom movement of India.