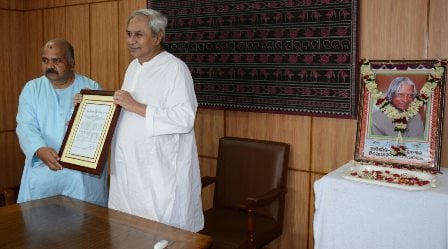 Bhubaneswar:  As a befitting tribute to former President Dr. APJ Abdul Kalam on his second death anniversary, a Gazette Notification renaming the Wheeler Island in Bhadrak district after him was published today.

The Odisha government had on September 4, 2015 renamed the Wheeler Island in Bhadrak district as Abdul Kalam Island. Besides, it had written to the Union Home Department seeking a No Objection Certificate (NOC) in this regard. However, the Union Government the issued the official notification only today.

Chief Minister Naveen Patnaik received the notification in the presence of Revenue Minister Maheswar Mohanty at the state Secretariat.

The Island was considered to be the work place of the most revered and loved President of the country for which he was known as the People’ President.

The Missile Man of India passed away on July 27 in 2015 while delivering a lecture, the work he loved the most, at the IIM-Shillong in Meghalaya.

Naveen was one of the many politicians who paid homage to this great leader of India. Apart from politicians, people from other walks of life also paid their rich tributes to the Bharat Ratna. Pattnaik created five sand sculptures of Dr. Kalam with the five popular names he is well known by Indians.