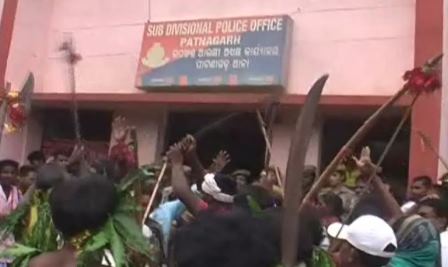 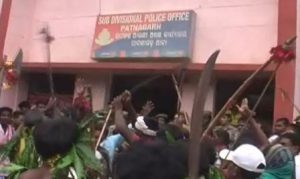 Kantabanji: Hundreds of members of Zilla Adivasi Sangh took to the streets on Sunday demanding stringent action against the doctors responsible for the death of Jasbant Dharua, a tribal woman from Pandarijor village who died after a sterilisation surgery at Belpada Hospital here last month. The strikers also gheraoed the office of the Patnagarh SDPO and resorted to sloganeering.

Holding traditional weapons, the tribals took out a rally from Pandarijor village and marched to the Patnagrh SDPO office in the morning. Later, they barged into the office premise which was closed in view of the protest and held a demonstration there. Alleging that the cause of the victim’s death was a ‘faulty’ sterilisation surgery, they demanded immediate arrest of the doctors responsible for the mishap.

Notably, the victim Jasbant Dharua was operated on at the Belpada Hospital on July 23 and underwent a ‘tubal ligation’ procedure. Soon after the surgery, she developed some medical complicacations and died fa ew hours later. Following her death, villagers started blaming the two doctors who had carried out the surgery and have been demanding action on them since then.