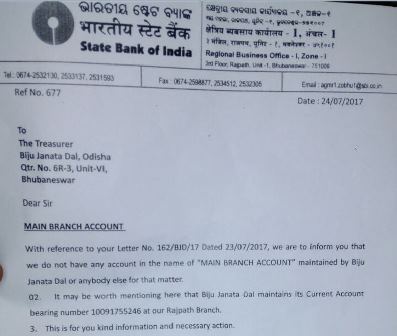 Bhubaneswar: Putting the record straight on the BJP’s allegation of illegal transactions done in the account of Biju Janata Dal (BJD), the State Bank of India (SBI) on Monday said the state ruling party has no account in the Main Branch of the bank but has a Current Account which is maintained legally.

“We do not have any account in the name of “MAIN BRANCH ACCOUNT” maintained by Biju Janata Dal or anybody else for that matter. BJD maintains its Current Account bearing number -10091755246 at our Rajpath Branch,” said a letter from the SBI to the Treasurer of BJD.

The bank also cleared the air on the transactions done in the account saying they are completely valid and legal.

BJP and BJD are engaged in a war of words following the former’s allegation.  While the BJP today moved the Income Tax Commissioner seeking a thorough inquiry into the alleged discrepancies in the data provided by the BJD on its election expenditure, the BJD decided to take legal action against some leaders of the saffron party and a particular English news channel, which had aired a report in this regard, claiming the allegation was politically motivated.