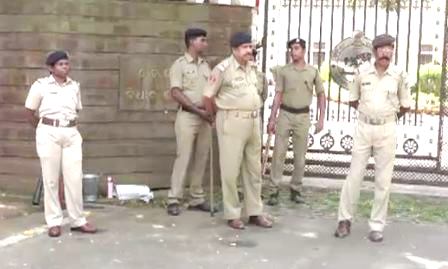 Bhubaneswar: The Commissionerate Police has put on place a three-tier security cover in and around Odisha Assembly in view of the Winter Session scheduled to begin tomorrow. The Session will continue till December 30.

As many as 28 platoons of police force will be deployed while 120 police officers will be in-charge of the security plan.

Besides, the police officials will also be stationed in plain clothes to have close vigil on the protesters on the Lower PMG Square. The protest ground will also be under CCTV surveillance. In addition, the Quick Reaction Team (QRT) will also be engaged to avert any untoward incident.

Among other things, the Supplementary Budget will be tabled by the Finance Minister Sashibhusan Behera on November 30.

The Winter Session is likely to be stormy with the Opposition planning to corner the State Government on several issues including farmer suicide, crop loss and Kunduli gang rape.

On the other hand, the ruling party is all set to counter the Opposition parties. It will defend itself by demanding a hike in paddy MSP and raking up the Centre’s failure to form a tribunal to resolve the Mahanadi water row between Odisha and Chhattisgarh.

All the three major parties – BJD, BJP and Congress will meet separately this evening to decide their strategies for the Winter Session.