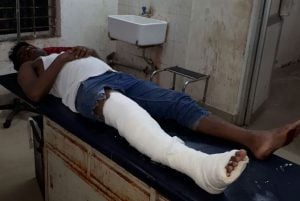 Berhampur:  Dreaded criminal Muna Sahu and one of his aides Radha Krushna Sahu were injured in a police encounter here in Ganjam district in Odisha last night.

In the latest encounter, police launched a manhunt near Jaleswar Khandi road under Gosaninuagaon police station limits in the city following information about the presence of miscreants involved in a case of bombing on a city based liquor shop, in which at least five employees of the liquor shop were injured.

In a bid to escape, Muna and his accomplices opened fire at the policemen. The cops also fired in retaliation following which Muna and Radha Krushna got bullet injuries on their legs, said a police official.

However, one of his aides managed to flee the spot.

Police seized three bombs, a pistol, four rounds of live bullets and a two-wheeler from their possession.

The injured miscreants were admitted to MKCG Medical College and Hospital in Berhampur for treatment. A manhunt has been launched to trace Muna’s other associates.