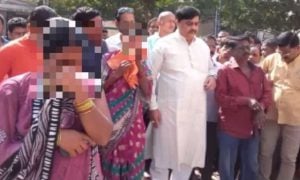 Cuttack: Tension engulfed the SCB Medical College and Hospital premises today, during the discharge of Kunduli gang rape victim, after her family members entered into an argument with the medical authorities over the victim accompanying them in the same vehicle as theirs.

The dispute arose after the medical authorities allowed only the victim’s mother with her in the same vehicle and asked the other family members to board another vehicle to leave the hospital. A heated argument ensued between the kin of the victim and SCB staffs over the issue delaying the discharge formalities.

Later on Koraput MLA Krishna Chandra Sagaria also protested the SCB authorities over the issue and sat on dharna in front of the hospital along with supporters. Realising that the situation had worsened, policemen stationed at the hospital resorted to mild lathi charge to disperse the protesters.

The victim was finally discharged from the hospital and allowed to leave with her mother and another member accompanying her in the same vehicle.

Notably, the Kunduli minor had been gang raped on October 10 while returning from Kunduli daily market by a group of men dressed like central force jawans. She was first rushed to Saheed Laxman Nayak Medical College & Hospital in Koraput and remained there under treatment for few days before being discharged. However, she was again admitted to SCB Medical College & Hospital on November 19 after her health condition deteriorated.