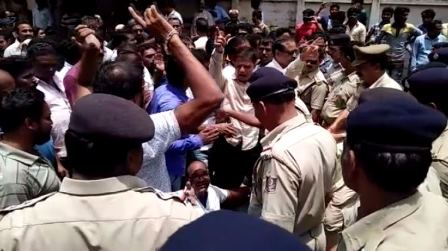 According to reports, more than 100 PG students arrived at Pujahari’s residence at around 11.00 PM and pelted stones at Pujahari’s house alleging poor security in the premises of the government-run hospital. They also tried to break open the gate besides hurling abuses at the Director.

Two junior doctors allegedly attacked the relatives of a patient for threatening to inform director of VIMSAR about their negligence in treating his kin. Later, in a bid to cover up the issue, the medicos gathered their colleagues and demonstrated in front of the house of Pujahari before pelting stone alleging that they are being repeatedly targeted by relatives of patients due to lack of adequate security in the hospital premises.

On the other hand, protesting the attack of the junior doctors on the patient’s kin and demanding action against them, some locals also demonstrated in front of the house of the director of VIMSAR this morning. They had a minor tussle with police officials when the latter tried to pacify the irate locals.

Police forces have been deployed outside the residence of Pujahari as well as in VIMSAR campus to avoid any untoward incident.