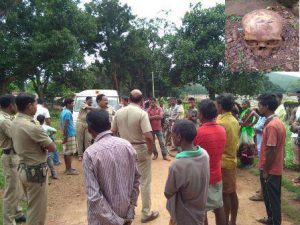 Keonjhar: Tension gripped Uparakusumita village in the district on Thursday night after a resident was allegedly found practicing sorcery at home keeping a human skull.

Reports say, a group of locals attacked Abhimanyu Patro’s home in the village in the night accusing him of practicing sorcery. During the raid, the locals found a human skull installed inside his home along with other objectionable items normally used in the practice of witchcraft. However, the accused managed to give the locals a slip during the incident. He however, surrendered to the police later.

After getting information on the incident, local police reached the spot and cordoned off the house of the accused

Police said it has seized the items used in the practice of sorcery from the house of the accused and put him under protective custody to avoid any untoward incident.