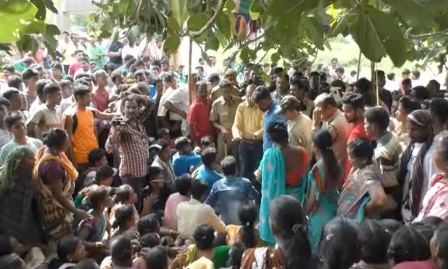 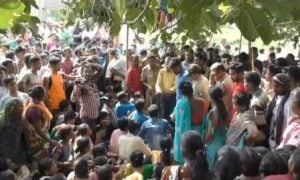 Rayagada: Tension erupted in Sanochandili area in Rayagada district on Sunday after angry locals protested in front of JK Paper Ltd located in Jaykay Nagar under Sanochandili area against a fencing work undertaken by the company on a public road. The protesters removed the iron fencing and forcibly disconnected the water supply to the plant from Nagabalil River.

Reports say a group of locals protested iron fencing work by JK Paper Ltd yesterday afternoon near the Balaji ME School in the area and indulged in a verbal duel with company workers. Later, hundreds of locals, including women, barged into the paper mill’s pump house and cut off the pipelines disrupting production in the plant.

The agitators claimed that JK Paper Ltd, which started its operation a few years back with an assurance to employ local youths, has failed in keeping it promise. Moreover, the company is resorting to arbitrary measures now and trying to fence a public road, they added.

As the situation started taking an ugly turn, JK Paper Mill General Manager SK Mohapatra and Rayagada sub collector rushed to the spot in the evening and had a talk with the agitators which ended without any solution.h

The GM claimed the incident was a fallout of misunderstanding which could be sorted out through dialogue.

“A misunderstanding has been created between locals and the company authorities and we are hopeful that a second round of talk would bring an amicable solution to it,” said Mohapatra on Monday.

Meanwhile, Chandili Police has deployed one platoon force in the area to prevent any untoward incident.