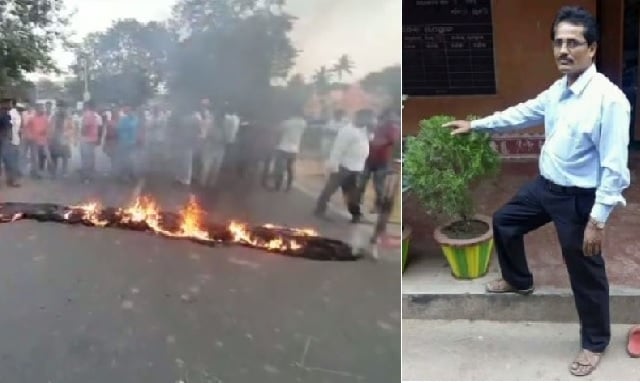 Jajpur: In a tragic incident a teacher died near his school after a speeding bike hit him in Jajpur district of Odisha. The incident took place in near Sarangpur on the NH No. 20 on the Kuakhia-Baruan road.

The deceased has been identified as Prabhat Kumar Mishra, the head master of Sarangpur UGME school. He belongs to Ektala village in Gandhana panchayat under Rasulpur block.

As per reports, the school is situated by the side of the road. Hence, today during the games period he led the students so that they can cross the road safely to reach the playground on the other side of road. However, after leading the students when he was returning back to the school a speeding bike hit him.

Accordingly, he sustained critical injury. He was rushed to the Dharmasala hospital and as his health condition deteriorated he then was shifted to the SCB Medical College and Hospital in Cuttack. However, he reportedly succumbed to the critical injury on the way to Cuttack.

Following the accident, blocked the National Highway and burnt tyres on the road. Hence, plying of vehicles on this road was stopped. The locals raised demand to construct humps and bridge near the school.

After getting information Rasulpur Tahasildar and IIC of Kuakhia Police Station reached the spot and discussed with the agitators. As they assured to solve the problems, the road blockade was lifted.