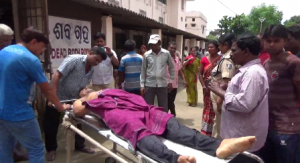 Baripada: Tension gripped the Swami Vivekananda Shikshashram (SVS) senior secondary school in Sirisbani, a residential school with boarding facilities for staff, here on Tuesday after the dead body of a teacher was recovered from a hostel room inside the institution’s premises.

The deceased teacher has been identified as Dinesh Mishra of Gobindpur village under Kuliana police limits.

According to reports, Dinesh, who went to sleep on Monday night after taking his food at the school mess, did not wake up till late this morning. Suspecting something fishy, some staffs of the school first knocked on the door and then broke it up to find him unconscious inside his room. He was immediately shifted to the Baripada Hospital where doctors declared him brought dead.

Tension erupted at the hospital premises after Dinesh’s family members claimed it to be a case of murder. They also claimed that some injury marks were found on the dead body which points to foul play. Tension receded only after Kuliana Police reached the spot and pacified the relatives.

Police said an investigation is underway and everything would be clear in a day or two.