Mayurbhanj: In a tragic incident a couple was attacked in Mayurbhanj district of Odisha in which the man was killed while his wife sustained critical injury. The incident took place in Jagannathpur village under Bahalada block in this district on Friday.

The deceased has been identified as Mansingh Soren and his wife is Salhomani Soren.

As per reports, three masked miscreants attacked the couple with axes when they were asleep at their house late in the night. As they screamed for help the couple’s son ran to rescue his parents. However, he was also attacked. A finger of the boy, a student of Class IX was reportedly chopped off in the attack. As a result of the attack while the man died on the spot the woman sustained critical injury.

The woman was rushed to Rairangpur hospital in critical condition but as her conditions deteriorated she was shifted to Baripada Medical College hospital. 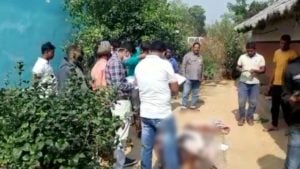 As per the circumstantial evidences, Police have suspected it to be a case of murder due to suspicion of sorcery. The scientific team also reached the spot from Baripada and investigation is underway.

It is to be noted that earlier in September an elderly woman was allegedly killed over suspicion of practising sorcery in Pada Kasada village under Kanjipani Police limits in Banspal block of Keonjhar district in Odisha.