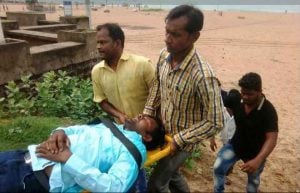 Bhubaneswar: Renowned sand artist Sudarsan Pattnaik, who has been sitting on a hunger strike to press his demand for cleaning of Banki muhan beach in Puri, was admitted to a private hospital here on Thursday.

Pattnaik, along with his students, was on a hunger strike since Tuesday appealing to the state government to take immediate steps to end pollution at the famous beach of the holy city in Odisha.

He had given a deadline till the end f day today for cleaning of the beach, failing which he had requested the Odisha government to relieve him as the brand ambassador for the state government’s Swachh Bharat campaign.