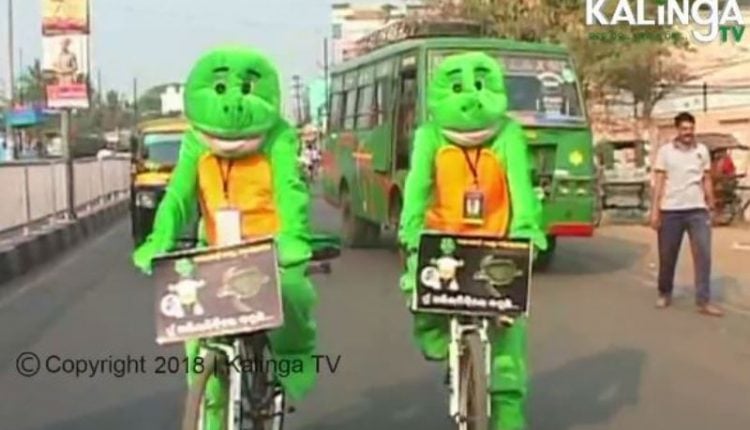 Berhampur: In a bid to create awareness among the people for the protection of the endangered Olive Ridley turtles in the state, two college students, dressed up like Olive Ridleys, went on a cycle expedition.

During their journey they visited the nesting sites of the Olive Ridley turtles at Rushikulya rookery coast in Ganjam district. Besides, they interacted with people from different walks of life including school and college students to sensitise them for the protection of Olive Ridleys.

“We took out the cycle expedition from Konark on March 7 to create awareness among the students and people about protection of endangered Olive Ridley turtles in the coastal districts of the state. We need to protect them like our guests who come from miles of kilometers away. We should help them in having a peaceful and safe nesting in our state,” said Soumyaranjan.

“So far, the response has been very good and we are being welcomed by people wherever we go. The people, especially the fishermen, have also promised us to protect the endangered Olive Ridley turtles,” he added.

The students, who have already crossed over 250 kilometres while covering coastal areas in Puri, Chilika and Gopalpur, will end their noble journey at Gahirmatha beach, the largest mass nesting site for the Olive Ridleys in Kendrapara on March 14.