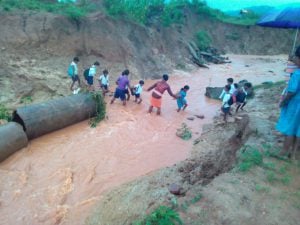 Nabarangpur: Commuting to school can be a highly risky affair for children in far flung areas of Odisha as students of Merdanguda and Bagaguda villages of the Jharigaon block in Nabarangpur district have found. They are left with no option other than risking their lives every day to reach school by wading through a muddy canal.

According to reports, around 16 children from Merdanguda and Bagaguda villages are enrolled in the Belajhari Primary School, located a kilometre away from their villages. The small kids have to cross the Naharmunda nullah daily at great risk to themselves to reach school. The plight of the student becomes worse during monsoon when the nullah suffers landslidea induced by rains at regulara. The children manage to cross the nullah with the help of their parents, but still run the risk of being swept away by the strong  currents of the stream any moment.

Venting out their anger against the administration, residents of these two villages have demanded a bridge on the Naharmunda nullah which remains turbulent during the monsoon. They have claimed that the Sarva Shiksha Abhiyan (SSA), the flagship program of the central government aimed at universalisation of primary education, could not achieve its objective in the absence of proper communication facilities to the villages.

Asked about the issue, the Jharigaon Block Education Officer (BEO) Suresh Kumar Nayak said he was new to the post and hence didn’t know much about the problem. On their part, the Cluster Resource Centre Coordinator (CRCC) of the area said he was aware of the issue and necessary steps would be taken to sort it out soon.