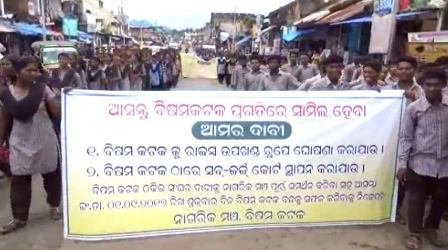 Bissamcuttack: Students of different colleges in Bissamcuttack hit the streets on Tuesday demanding a Revenue Sub-Division and Sub-Judge Court in the town.

Bissamcuttack Nagarika Mancha also extended its support to the locals, who had launched a demonstration two days ago to press their long standing demand.

On this occasion, the agitators marched in a huge rally from the Markama Temple to the office of the local Tehesildar and submitted to him a memorandum addressed to the Chief Minister Naveen Patnaik.

“It is our long standing demand that the Revenue Sub-Division and Sub-Judge Court should be set up in Bissamcuttack. However, the state government is yet to take any action in this regard. We will intensify our demands if the government fails to address our demands in near future,” said Gopal Krushna Patnaik, President of Bissamcuttack Nagarika Mancha.

The Lawyers’ Association of the town has called for a bandh on September 1st in a bid to draw the attention of Rayagada district administration and state government to their demands.