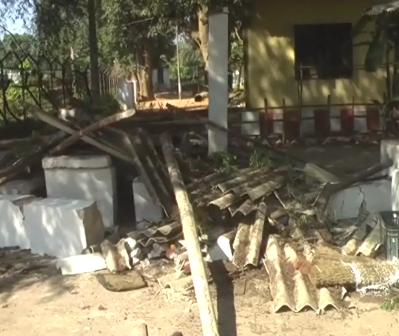 Sundergarh: In yet another case of man-elephant conflict over dwelling place, a herd of pachyderms wreaked havoc in K Balanga village on Saturday and destroyed property worth lakhs.

The incident took place in the wee hours of the morning, when a herd of at least 25-30 elephants which had sneaked into the K Balanga Primary School yesterday night and taken shelter over there following a disperse drive by neighbouring Bajinia villagers, went berserk.

Rattled over the elephant rampage villagers called up Banki Forest Range for help, which swung into action later in the morning and sent a team of officials to the village.

Villagers have blamed the Banki Forest Division officials for today’s incident and alleged that they have failed to check the elephant infestation into the village. In addition, they also claimed that the forest officials are not taking steps to compensate the victims of elephant attack.

However, ruling out any negligence on the part of the forest department, Banki Ranger Surbinder Singh said officials have been put on alert and doing everything possible to keep wild pachyderms at bay.