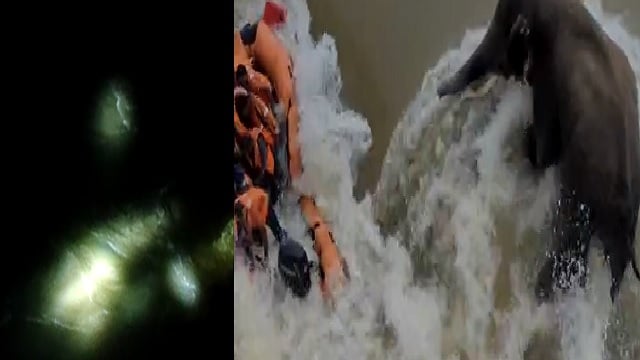 Cuttack: After hours of struggle to be rescued, the stranded tusker near Mundali bridge in Mahanadi river at Athagarh has lost its life late last night. Reportedly, the locals were present on the bridge to witness the tusker rescue operation till late night.

Thereafter, as the locals could not find the tusker standing in middle of the river, they used their torch lights to trace the jumbo. Later, they spotted the floating carcass of tusker in the river.

However, the forest department has not officially confirmed yet regarding the death of tusker.

Meanwhile, eight boats of National Disaster Response Force (NDRF) team, each consisting six members, have been deployed in Mahanadi river near Mundali bridge in search of missing Odisha Disaster Rapid Action Force (ODRAF) jawan Sitaram Murmu, added reports. He went missing in the boat mishap on Friday while a team went into the waters along with two journalists during the tusker rescue operation.

On the other hand, one person has been killed in an elephant attack near Kali Mandir at Naraj, Cuttack. The deceased has been identified as Sushant Kumar Behera.

Earlier on Friday, two journalists identified as Arindam Das and Prabhat Sinha along with five members of ODRAF team were onboard the ODRAF boat that capsized at Mundali during the rescue operation of the tusker stuck at the spot. While six of them were rescued in a critical condition and were rushed to SCB Hospital, Odisha’s noted journalist Arindam Das died after drowning in the river.