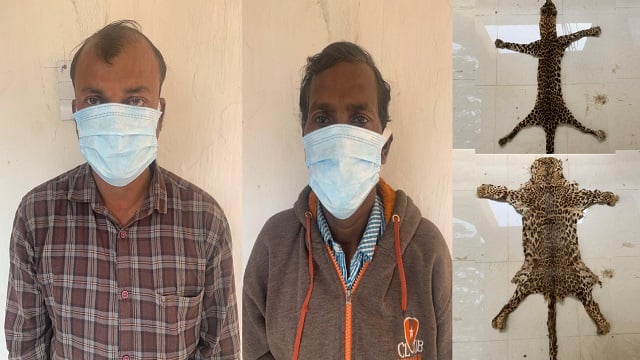 Mayurbhanj: The team of the Special Task Force of Mayurbhanj district has seized two leopard skins and arrested two dealers in this connection. The arrested dealers have been identified as Prasanta Kumar Mohanty of Kuamara village under Talakadada police limits and Gora Bindhani of Balijuda village under Kadualbandh police limits.

Based on a piece of reliable information regarding a deal to sell the leopard skins, the team of STF with the help Betanati Forest Officials near S.C.B. Junior College, Ragdha, under Betanati police limits and apprehended Prasanta and Gora from the spot.

During the search, two leopard skins and other incriminating materials were seized from their possession. The accused persons could not produce any valid authority in support of the possession of leopard skins. Hence, they have been detained and handed over to Baripada Forest Officials for legal action at their end.

The Leopard Skins will be sent to Wild Life Institute of India, Deharadun for chemical examination.

Meet a 6-year-old who wakes up at six every day to cook for himself, do housework and then go to school