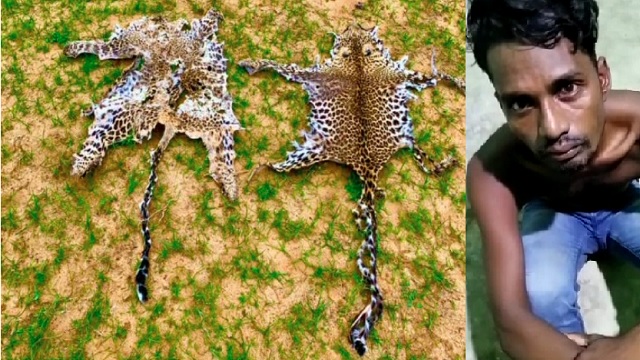 Boudh: The Special Task Force (STF) of Odisha crime branch have seized two leopard skins near Kapasira village in Kantamal block and have apprehended one person in this connection. The arrested person has been identified as Jibardhan Bhoi (25), a resident of Lunduru village in Narayanprasad panchayat under Kantamal police limits.

On basis of reliable information about a deal of sale of leopard skin by the wild life criminals, a team, including STF and Crime Investigation Department (CID), led by Crime Branch DSP conducted a raid at Sonepur.

Thereafter on Monday night, the team nabbed Jibardhan near Kapasira sqaure on national highway 41 under Manumanda police limits while he was packing the leopard skins in a rag. The accused person could not produce any valid authority in support of the possession of leopard skin.

Hence according to the Animal Protection Act 1972, the accused was arrested by the STF and handed over to the Boudh DFO. A case has been registered in Manamunda and the accused will be forwarded to court today.

During last one year, Special drive against the wildlife criminals/poachers have been launched, STF has seized as many as 18 nos Leopard skin, nine elephant tusk, two deer skin, five live pangolin and 15 kg pangolin scales and arrested 36 wild life criminals.

STF is the specialized wing of Odisha Police to curb the organized crime in the State. Wild life crimes remain the one of the focus area of STF and STF will continue its drive against the wild life crime and criminals

Covid resurgence in US amid colder weather