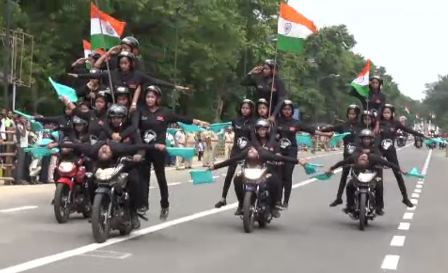 Bhubaneswar: Mahatma Gandhi Marg in Bhubbaneswar is all set for the 71st state-level Independence Day celebrations on Tuesday.

Chief Minister Naveen Patnaik will attend the function as the chief guest and hoist the Tricolour at 9 AM. A mock drill of Patnaik’s carcade from his residence Naveen Nivas to the parade ground was held here this afternoon in the presence of many senior cops of the state. Rehearsal of the parade is also over.

The Commissionerate Police has made elaborate security arrangements for the peaceful observance of the historical day.

Briefing media persons about the security arrangements, Police Commissioner Y.Khurania said that as many as 25 platoons of police force will guard the celebration under the leadership of 200 senior police officials. They will be deployed at all the strategic locations, including Raj Bhawan and Jayadev Bhawan. Besides, plain-clothed personnel will also deployed to keep an eye on any possible trouble.

Quick Action Team (QAT) will also be stationed at various places.  Besides, CCTV cameras will be installed at every lane and bylane opening to Mahatma Gandhi Road. Restrictions have been imposed on vehicular movement on Mahatma Gandhi Road for tomorrow.

The major attraction of the celebration will be the daredevil show performed by college students.

You can watch the live telecast on Kalinga TV from 8 AM onwards tomorrow.