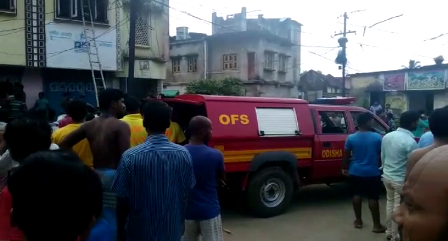 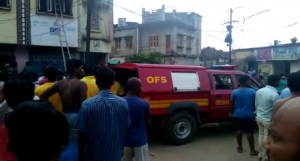 Dhenkanal: A major fire mishap was averted due to the timely intervention of the fire brigade at Karigar Sahi under Dhenkanal Town police limits on Tuesday. The incident occurred after a snapped 11KV livewire fell on an electrical shop in the area causing fire in the shop and gutting valuable electrical accessories kept inside.

According to reports, some locals in the Chandan Bazaar area in Karigar Sahi witnessed smoke billowing out of an electrical shop in the area this morning. On reaching the spot, they found a snapped 11KV electric wire hung on the roof of the shop with a part of it touching a Low Temperature (LT) transmission wire passing under, causing sparks. They immediately called up the fire brigade to prevent the fire from spreading to nearby houses.

Fire tenders reached the spot immediately and brought the flames under control. Though no casualty was reported in the incident, valuable goods kept inside the shop and a nearby house were gutted in the mishap. Some locals in the area also complained that their home electrical wirings were affected in the incident.

Police has reached the spot and started investigation.