Baripada: In a shocking incident, a cobra was found inside a courier parcel in Rairangpur of Mayurbhanj district on Saturday.

The receiver of the parcel identified as S Muthukumaran, a native of Vijayawada in Andhra Pradesh later informed the forest officials which released the snake in natural habitat.

As per reports, the consignment was dispatched from Guntur through courier firm ‘Agarwal Packers & Movers’ on August 9 to S Muthukumaran who has recently moved to Rairangpur. 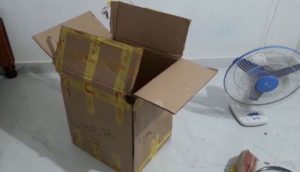 However, he was shocked to see the cobra of around four feet in the parcel that contained household items. Forest officials said that the reptile might have entered the parcel box during the shipping of the consignment.

The incident was reminiscent of the parcel bomb incident in which two persons were killed after opening the parcel at Patnagarh in Balangir district in February last year. Groom Soumya Sekhar Sahoo and his grandmother Jemamani had died following the explosion of the gift while Soumya’s wife Reema had sustained severe injuries in the incident.

3 drown to death in separate incidents in Odisha