Odisha: Cobra bites man, he bites it back! 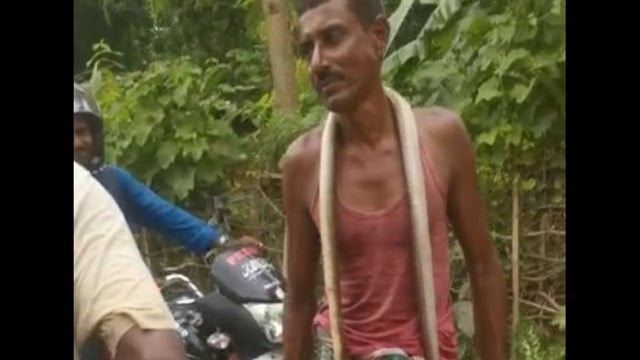 Jaleswar: People are generally scared of snakes and run in the other direction when they see one. The reason for this is also quite simple- a snake bite can kill a healthy adult in mere minutes. However, there are always exceptions found in this world.

In a shocking and rare incident, a man reportedly bit a snake to take revenge as the snake bit him when he was working in his crop field. The incident took place in Darada village under Basta police station in the Balasore district of Odisha on September 6, 2022.

As per reports, Salim Khan of Darada village was working in the paddy field for the day. While working, he was bitten by a snake. It was a poisonous cobra snake. Instead of getting scared or getting medical help, he chose to find the snake and bite it in return to take revenge, he said.

People were surprised to see him walking around with the dead snake wrapped around his neck. He simply said that since the snake bit him, he bit the snake back.

He seemed to be doing fine after the incident.