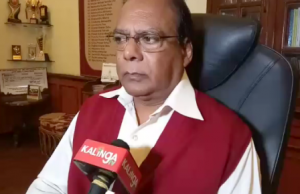 Cuttack: In a development to the alleged sexual harassment case by lady faculty member of Ravenshaw University, the Vice Chancellor of the varsity Prakash Chandra Sarangi today said the complainant would face disciplinary action as all charges brought by her against Hindi Department HOD Abhishek Sharma were found baseless.

Citing the findings of varsity’s inquiry committee report, Sarangi said the complainant would face the music for bringing false allegations against a colleague which attracts action under Orissa University First statutes, 1990. However, the VC maintained it that the manhandling charge brought by Sharma against the complainant was found to be true and the committee has got significant lead in this direction.

On the other hand, the complainant woman faculty member questioned the authenticity of the inquiry report by claiming that she had not been quizzed by the committee. She said the report appears one-sided.

“I have not received the report yet. I got to know about it from media only and now feel the inquiry report to be biased. The college authority is trying to protect the accused HOD and a conspiracy is going on against me”, said the complainant.

“I would decide upon the next course of action after getting the report”, she added.

Notably, the woman faculty had lodged sexual harassment cases against Sharma at the varsity authority as well as police on November 13. On the other hand, HOD Sharma had also brought charges of assault against her.