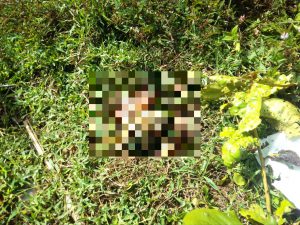 Gajapati: In a bizarre incident, two chopped off human palms were recovered by police in the Tumisahi village under Mohana block of the district on Thursday. The incident spread panic in the village, which is prone to witchcraft related incidents.

Reports say a group of residents from Tumisahi spotted the two severed human palms in a half-decomposed state under a tamarind tree near a grazing land close to the village last evening. Villagers immediately called up the Mohana police, which seized them and sent them to the scientific lab.

While investigation is on, police is yet to ascertain where the palms came from. They have not ruled out the possibility of criminals having committed a murder somewhere else and dumped the mutilated body parts of the victim in the village to confuse the police.

Sources in the Mohana police said the recovered palms were similar to those collected by the mortuary in the MKCG Medical in Berhampur from unclaimed dead bodies. It added, police stations across Ganjam, Gajapati, Kandhamal and Rayagada have been told to inform if any dead body with palms missing is found in their areas.