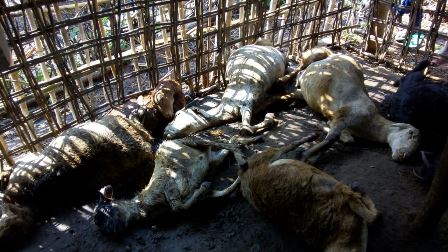 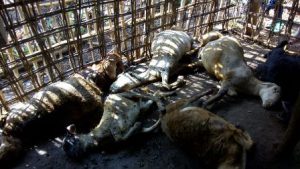 Ganjam: Adding to the fear of the mystery predator that has haunted villages in Niali area for the last couple of months and has spread to other parts of the State in recent times, seven more domestic animals, including four lambs and three sheep, were found dead in Kunchudu village under Buguda block in Ganjam district on Wednesday night.

All deaths were reported from the cattle shed of Uday Patro, a resident of Kunchudu village, late in the night. The incident came to the fore after Patro visited his cattle shed in the morning today. While it is still not clear under what circumstances these animals died, villagers suspect it to be the result of an attack by an animal.

With the death of sheep and lamb today, the mystery animal fear has returned to the district after a few days lull. Twelve sheep were killed in the Badapathar village of the neighbouring Bhanjanagar area on July 7 in a similar fashion. The incident was followed by 10 more sheep deaths in Kupati village on July 9.

Notably, the efforts of a two-member team of Wildlife Institute of India (WII), which visited Bhanjanagar following the sheep deaths to identify the killer animal in the first week of July, went in vein as it returned empty handed.