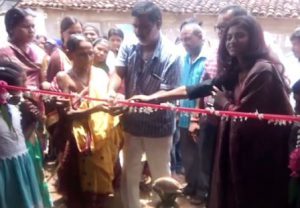 Bhawanipatna: The Seva Prayas Foundation, a leading NGO active in the field of women and child development in the state, inaugurated its new office premises in Durkauta village under Narla Tehsil in the district on Monday.

Cutting the ribbons and inaugurating the new office, noted social activist and director of Seva Prayas Foundation Linkan Subudhi addressed a public meeting and informed the NGO would work towards women and child welfare in the district. Her NGO would strive to prevent social evils like child marriage and violence against women through awareness drives in the area, she added.

Officials from the NGO’s Bhubaneswar office were also present at the inauguration ceremony.

Notably, Seva Prayas Foundation came to limelight after it organized a women’s car rally in Bhubaneswar in 2016 in association with Carnival, one of the leading creative agencies of Odisha.