Setting example for others! This Tehsildar moves from house to house to distribute land pattas to beneficiaries 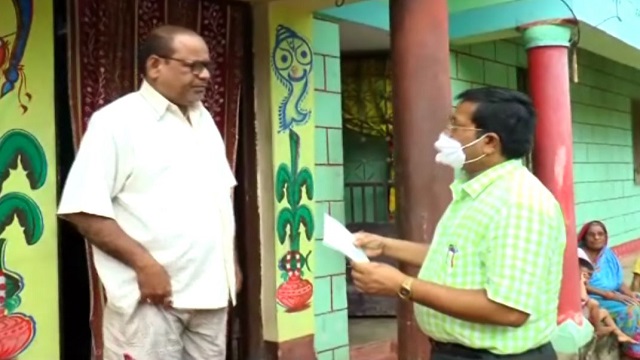 Jajpur: People no longer have to run to the Tehsil office for a land patta as the tehsildar himself is distributing the document from door to door. The tehsildar arrives at the beneficiaries’ house and distributes the land pattas to them by himself. It may sound strange, but it’s true. Today we are going to tell about a tehsildar who is bringing the land pattas for the poor people at their door, which is a rare incident in Odisha.

The Odisha government has directed the revenue department to complete the land-related work on an emergency basis. Whether by postal mail or the tehsildar himself will have to reach out to the people to make the land pattas available for them.

Pradeep Kumar Sethi, the Tahsildar of Darpan tehsil in Jajpur district literally follows the direction of the State government. He goes from house to house to distribute the land pattas to the people. The beneficiaries are also happy to get their land pattas at their doorstep.

Earlier, people had to rush to the tehsil office to get a land patta. They also used to spend lots of money to get the land document. However, Pradeep Kumar, who joined as tehsildar of Darpan tehsil some months ago, has expedited the process of providing land pattas to the beneficiaries.

As it is impossible to send pattas through postal service due to frequent failure of internet services, the Tehsildar himself goes from house to house every Friday along with his staff to distribute the land pattas to the beneficiaries. Till date, the tehsildar is said to have distributed land pattas to more than 2,000 beneficiaries of the tehsil.

Meanwhile, Pradeep Kumar Sethi’s exemplary work has been praised by people of all walks of life and is a topic of discussion in the district.