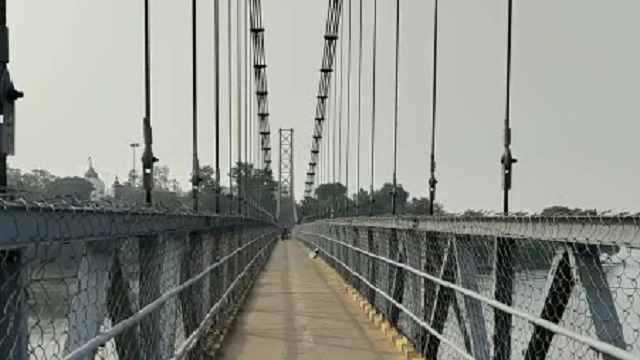 Cuttack: After the tragic incident of Gujarat Morbi hanging bridge, the Odisha administration has buckled up to avoid any kind of mass tragedy in the state. The Athagarh administration imposed Section 144 at the Dhabaleswar Shrine here in Odisha this evening.

According to reports, section 144 will be clamped till the repairing work of the hanging bridge gets over. Besides, the devotees are informed to visit the shrine by boat.

As per sources, a technical team will check the safety of the poll. Besides, the poll will be closed if it does not meet the safety protocols, informed by the collector of Cuttack Bhabani Shankar Chayani. The administration further added that the life of the people is more precious than any other thing.

It is to be noted that earlier today, the hanging bridge was inspected by a special team from Kolkata. They informed the district administration to limit the number of people on the bridge to 200. However, the hanging bridge has a capacity of 600 people at a particular point of time.

The administration has further informed that, the condition of the cable bridge has become weak, accordingly women who observes Badaosa Brata, can come to visit to perform darshan.

Keeping an eye on the safety purpose, ODRAF and Firefighters teams have been allotted near the pole. According to sources, the construction work of the concrete bridge next to the cable pole will be concluded by next year.

Realme UI 3.0 based on Android 13 rolling out for Realme GT 2 Pro