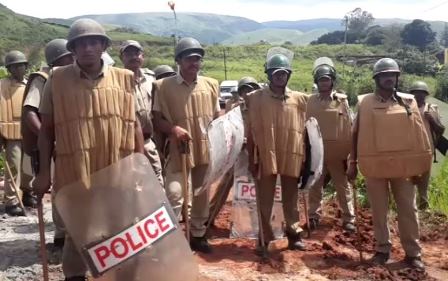 Koraput:  Koraput district administration imposed Section 144  of CrPc at Ambogaon under Damanjodi police station after tension erupted in the area due to a protest by locals over construction of a boundary wall by National Aluminium Company (NALCO).

The district administration has deployed four platoons of police personnel at the site to avoid any untoward incident.

Three Magistrates, including tehsildars of Koraput and Laxmipur, Sub-Collector Krutibas Rout, Additional Superintendent of Police (ASP) V.R. Rao, Koraput SDPO Balabhadra Deep and IICs of Damanjodi, Sunabeda and Semiliguda police stations are at the spot and closely monitoring the situation.

The locals, who have lost their land due to NALCO’s project, have been vehemently protesting the construction of the boundary wall for the last several years demanding employment in the company first.

Pointing out that the aluminium major is constructing the boundary on land registered in its name, the Sub-Collector said the locals should not protest.  Besides, as many as 77 residents of the village had agreed and signed a personal recognizance (PR) bond during a meeting not to create any problem, he added.