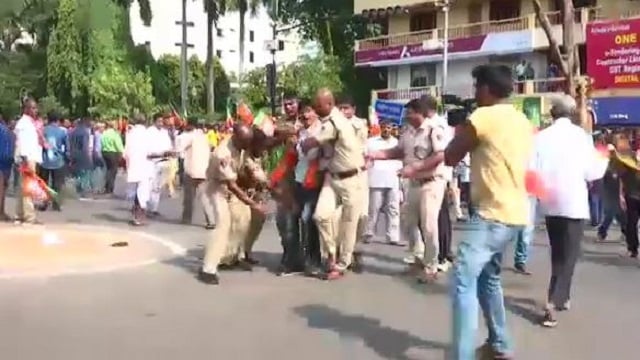 Bhubaneswar: Scuffle between hundreds of Bhubaneswar BJP workers and Police had taken place while  they were marching towards Naveen Nivas.

According to reports, the BJP workers were protesting for a strict probe to be conducted against Archana Nag and over the death of Zila Parishad Member Dharmendra Sahu.

Besides, the BJP workers were also demanding a strict action against Minister Samir Das for the death of Dharmendra and also alleged that the Odisha Government is doing any further investigation in these matters.

It is noteworthy that, hundreds of Bhubaneswar BJP workers gathered and started to march towards Naveen Nivas from Odisha BJP party office to convey their demands.

Later to protect law and order, the police waylaid the BJP workers at Sishu Bhawan square, which later turned into a situation of Scuffle between the police and the BJP party workers. Besides, hundreds of BJP workers were detained during the scuffle by the police.

Toyota Innova Hycross set to debut in India on this date, Check the specs here

Congress gets majority in Himachal by winning 40 seats, BJP…