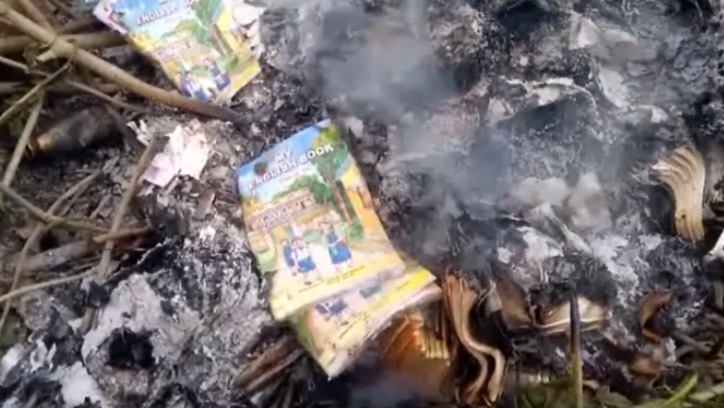 Nabarangpur: Thousands of text books were found burnt at the Block Education Officer (BEO)’s office premises at Jharigam Block in Nabarangpur district on Wednesday. The books were meant for free distribution to school students for the academic year 2016-17.

The local people claimed that the students were not provided text books during the last session despite sustained agitation by parents of students and various organisations.

“The government has been spending crores of rupees to provide quality education to school children under the Sarva Shiksha Abhiyan (SSA) for achievement of the goal of Universalization of Elementary Education (UEE) in this tribal region.  However, the students are not getting the books due to the careless attitude of the concerned officials,” said social activist Urmila Sahu.

Talking to Kalinga TV, BEO Suresh Chandra Nayak said, “I will look into the matter of book-burning issue and appropriate action will be taken for the responsible officials.”

Jharigam ,a tribal dominated block in Nabarangpur district, is among the mots backward regions in terms of elementary education.