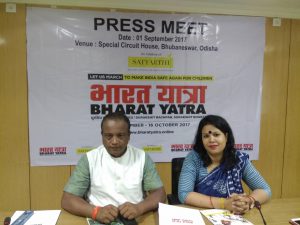 Bhubaneswar: In an effort to create awareness among people to curb child sexual abuse and child trafficking in the country, Nobel laureate Kailash Satyarthi will kick-start the Eastern stretch of his Bharat Yatra from Bhubaneshwar on the 26th of September 2017, the Kailash Satyarthi Children’s Foundation announced today. The yatra would reach Bhopal on October 5.

The march will be flagged off from Kanyakumari from the Vivekananda Memorial on September 11, 2017, commemorating the anniversary of the great leader’s address at Chicago in 1893, and culminate in New Delhi on October 16.

Addressing a media conference here on Friday, Rosalin Patasani Mishra, Founder, Parichay Foundation and Madhusudan Das, State Convener, National Youth Project, narrated the problems of rampant child sexual abuse and trafficking in the state of Odisha. They also expressed their deep regret about the reported cases of minor girls who are raped by family members or close friends.

“Odisha has grappled with issues of child labour for many years. It also faces the twin issues of icreasing trafficking and rape. The time has come when the citizens of this state and across the country have to start acting and working towards the education and empowerment of the girl child. The Bharat Yatra should be that movement of collective action for our young girls and children across the country, to make a change” Rosalin Patasani Mishra said.

“We must work unitedly to help eradicate child sexual abuse and trafficking in order for Odisha and India to progress both economically and socially. I appeal to the youth of this country to step forward and take charge to engineer a social revolution. The time is right to harness the power of the youth to drive this change and keep pushing for a brighter future for themselves and the generations to come,” Madhusudan Das appealed.

The Foundation also said that the Bharat Yatra, launched to work towards creating an India that is safe for our children, has received wholehearted support from the Prime Minister Narendra Modi.

According to National Crimes Records Bureau and National Family Health Survey-3, child marriage is a cause of concern in Odisha with 1, 21,669 girls and 1, 37,464 boys being married off before the legal age. According to the State police data, a high of 206 children (below 18 years) were trafficked in 2016. The number of trafficked children grew by an alarming 44 per cent in 2016 in the State.

The Yatra is the launch of the three-year campaign against child rape and child sexual abuse which is aimed at increasing awareness and reporting of the cases, strengthening intuitional response, including medical health and compensations, ensuring protection for victims and witnesses during trials and increasing conviction of child sexual abuse in a time bound manner.

Kailash Satyarthi has been campaigning for the freedom, safety and security for children across the globe for the past 36 years. He has led the historic Global March against Child Labor in 1998 that prompted the ILO to pass international conventions against the worst form of child labour, in addition to the Shiksha yatra in 2001, after which the Right to Education was included as a fundamental right in the Constitution of India.