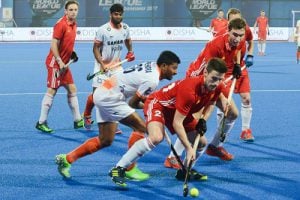 Bhubaneswar: After an impressive first match against World number 2 Australians, India looked a bit off the colour in the first two quarters as they played the for second match against England on Saturday.

Unlike the first match against Australia where the team made a couple of close attempts in the first two minutes of the game itself, India started slow in the first two quarters. Taking advantage, England penetrated into the Indian D and attempted shots on target, and finally succeeded in the 25th minute when David Goodfield scored a loose goal.

As the third quarter commenced, Sam Ward, who made a debut at Kalinga Stadium in Bhubaneswar in 2014, doubled the lead in 43rd minute.

Aware the match is fast losing, India bundled all its strength and pulled both the goals back within three minutes.

Just when the match looked to settle at a draw, a charged Sam Ward hammered the final goal with three minutes to go for the final hooter.