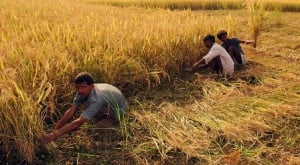 Bhubaneswar: Chief Minister Naveen Patnaik on Wednesday expressed his displeasure over the Union Agriculture Ministry’s decision to increase the minimum support price (MSP) for paddy by a mere Rs 80 per quintal.

“The Centre’s decision to increase the minimum support price (MSP) for paddy by only Rs 80 per quintal is quite ‘disappointing’,” said the Chief Minister.

Based on the recommendations made by the Commission for Agricultural Costs and Prices (CACP), the Ministry, on Tuesday, proposed to increase the MSP for paddy by Rs 80 per quintal from Rs 1,470 to Rs 1,550.

The Union government’s proposal has not gone well with the BJD and Congress in Odisha. Terming the move as ‘anti-farmer’, the two parties said they would stage protests over the Centre’s decision.

Demanding a hike in paddy MSP to Rs 2,930 per quintal, the Odisha Assembly had passed a unanimous resolution during its budget session. The House Committee chaired by the Speaker had also sought an appointment to meet Prime Minister Narendra Modi to present their demand for consideration.

In his reaction to Patnaik’s statement over the paddy MSP hike, Union Minister Dharmendra Pradhan said, “The Central government has launched many welfare schemes for the farmers. But, what has the Odisha government done for the farmers?”