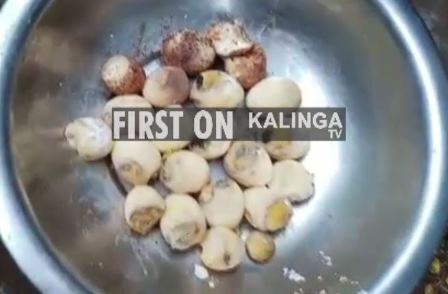 Nabarangpur: Students of Mundagarh Primary School in Kosagumuda block of the district were served rotten eggs in the Mid-Day Meal (MDM) on Saturday.

The matter came to light when the students informed a local, who happened to visit the school for some reason. The villager brought the matter to the notice of the school authorities, but his words went unheard. Later, the villagers locked the school alleging that the students were being served poor quality food.

“I found many black spots on the eggs. They were stinking very badly. I asked the cook to serve the eggs after tasting. She said she could not do that as foul smell was emitting from them. Then I rang up the Head Master of the school as he was absent. He told me that he would send someone to look into the matter and change the eggs. As no one came, I called the president of the school. However, none of them came to take stock of the situation,” alleged the local, who had visited the school.