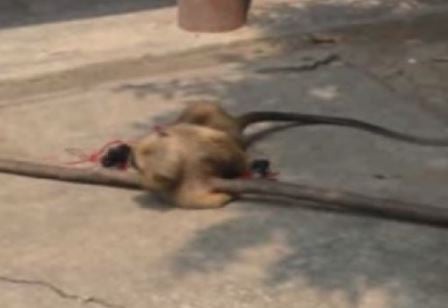 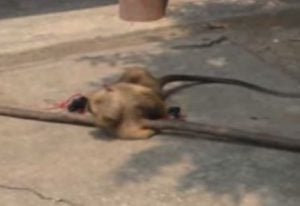 Soro: The monkey scare which kept haunting Raipur village under Soro police limits in Balasore district over the last one week finally came to an end on Monday with district forest officials capturing the animal after tranquilizing it.

The rougue male monkey was struck with a tranquiliser fire by Balasore forest officials on Sunday but still managed to escape. It was again spotted in the village this morning. The forest officials and Mankadia tribals waiting there first tried to caputure the animal and then fired another tranquliser dose at it. After the animal fell unconscious under the influence of the tranquilizer, they captured it.

Sources in the Balasore forest range informed that the monkey would be released in Kuldiha sanctuary following a brief medical treatment as several injuries marks have been spotted on its body.

Notably, residents in Raipur spent sleepless nights since last five days following the monkey attack, which left 39 people injured in the village. While initially two monkeys—one male and one female–carried out the attacks, the female one was captured by the Mankadia tribals yesterday. Some forest officials and members of the Mankadia tribe also sustained injuries in the effort.

Meanwhile, after capturing the monkey, the forest department has started preparations to compensate the victims suitably, said sources.