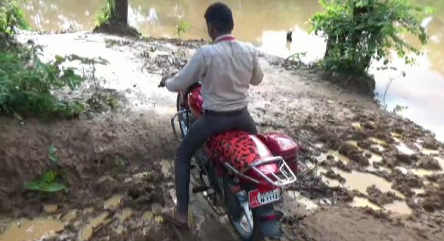 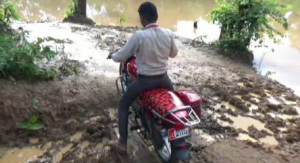 Kantabanji: In the nondescript village of Bagabel under the Turekela block of Balangir district, having an all-weather road still remains a dream. With incessant rains in the last few days, the only road to the village has been rendered completely unusable.

After the rains, the lone road to the village, which passes through a swathe of paddy fields and a forest, has developed puddles all along, making commuting a hazardous business.

Things become particularly difficult for the people when there’s a medical emergency in the village. The condition of the sole road to the village makes it hard to reach the hospital in time on such occasions. Without a concrete road, every chore seems to be an ordeal for the villagers – be it getting to the medical centre or going to the nearest town for the miscellaneous work. Even the children who study in various government and private schools have to ply on the same route to reach the school.

Most of the villagers are daily wage labourers and commutation to the nearest Turekela town on a daily basis is nothing short of an ordeal.

The people complain that local politicians never fail to make promises while seeking votes from the villagers, but forget all about them once they come to power. Till now, there has been no plan with the local body for the construction of an all-weather road.

Bagabel stands as testimony to all that has gone wrong with the rural connectivity programmes launched by the Centre and the state government.