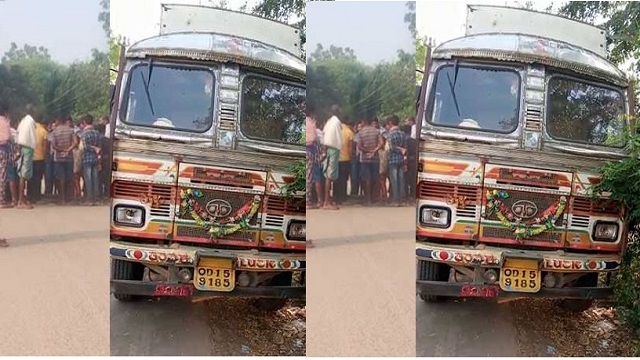 Balangir: In a tragic incident, a youth has been mowed down by a rice-laden truck in  Patrapali village under Muribahal Police limits of Balangir district in Odisha today.

The deceased has been identified as Madhav Maji of the village.

According to reports, this morning, Madhav was going to the village’s pond. Suddenly, the speeding rice laden truck appeared and mowed Madhav to death on the spot.

Soon, the villagers got enraged over the factor, detained the truck with its driver and blocked the Muribahal-Bondamunda road for the demands of compensation for the deceased family.

Due to the blockade vehicles on both sides of the road remain stranded.

Soon, the police was informed about the incident, on being informed the police reached the spot, seized the body and had a discussion with the agitators.

Besides, the police has detained the truck driver and initiated a probe into the matter. As per sources the police is having discussion with the agitators regarding the competition money for the deceased.

Tamil Nadu man kills wife for making too many reels

Sania Mirza and Shoaib Malik getting separated 12 years after marriage!