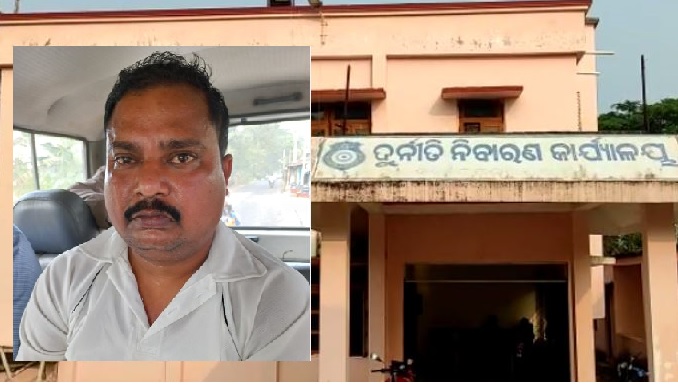 Jagatsinghpur: The Revenue Inspector (RI) of Japa in Jagatsinghpur district of Odisha was apprehended by the vigilance sleuths while accepting Rs 10,000/- bribe.

The Revenue Inspector has been identified as Samir Kumar Mallick.

As per reports, the Revenue Inspector of Japa in Jagatsinghpur district was apprehended by Odisha Vigilance for demanding and accepting undue advantage (bribe) of Rs.10,000/- (Rupees Ten Thousand) from a complainant in order to favour him in a mutation case in Ersama Tahasil in the district of Jagatsinghpur.

Based on the above complaint, a trap was laid on Tuesday wherein the accused Samir Kumar Mallick, RI was caught by the team of Odisha Vigilance in front of his office room while demanding and accepting bribe of Rs.10,000/- (Rupees Ten Thousand) from  the complainant.

The entire bribe money was recovered from the possession of Mallick and seized in presence of witnesses. Both hands wash as well as pant pocket wash of Mallick gave positive chemical reaction, confirming acceptance and handling of bribe money by him.

Following the trap, simultaneous searches have been launched on the residential house of Mallick at Chanarpur in Balikuda Police limits in Jagatsinghpur district and office room at Japa, Ersama, Jagatsinghpur.

He has been arrested and is being forwarded to the Court. In this connection, Cuttack Vigilance P.S. Case No.55 dated 27.12.2021 U/s 7 Prevention of Corruption (Amendment) Act, 2018 has been registered and is under investigation.