Rayagada flood affected to get cooked food for 7 days 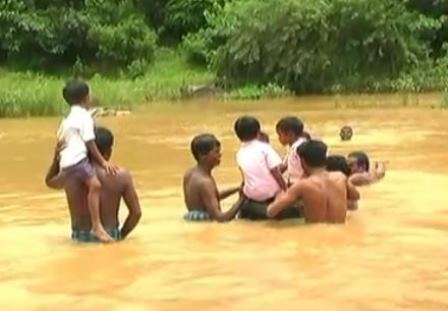 Bhubaneswar: The state government will provide free cooked food to the flood affected people in Kalyansinghpur block for the next seven days.

He also said that administrations of all neighbouring districts of Rayagada have been instructed to provide the required manpower and materials support to the Rayagada district administration.

Sethi claimed that ODRAF, CRPF and fire fighters are carrying out the rescue operations on a war footing in all the 12 affected villages of the district.

Four choppers which were sought from the Indian Air Force (IAF) will be used for both evacuating the marooned villagers and distributing the relief materials.

Water level in Nagabali and Kalyani rivers is said to have come down as Andhra Pradesh opened 10 gates of Thotapalli Barrage.

Two out of three persons who were washed away by the flood water are said to have been rescued from a tree at Gadisesakhal village of the block.

The government announced closure of all schools in the block for the next few days in view of the flood.

However, 60 families of Nelapata village are in a state of panic as flood water from Nagabali river entered the village this evening.

Trains passing through Ragagada district have been disrupted as the railway track has been washed away at several points.