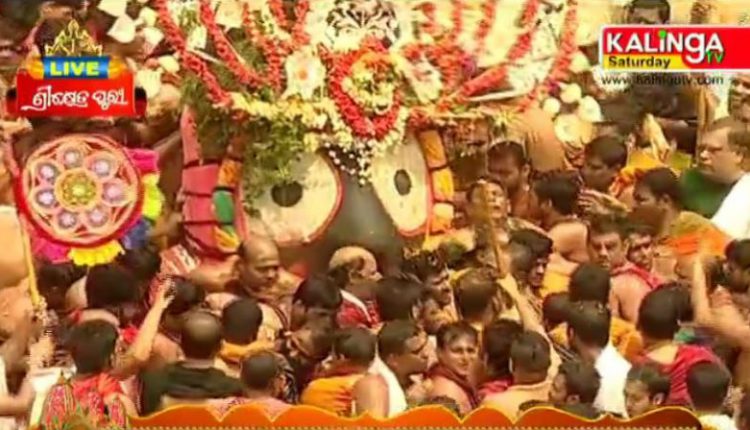 Puri: With the annunal sojourn of the holy trinity is about to start at Puri Sri Jagannath temple with religious fervour, the first ritual in the line-up the ‘Dhadi Pahandi’ (one after the other) has already begun.

Lords were carried out of the ‘sanctum sanctorum’ and decked up with ‘Tahias’ (floral crowns) to take part in the ceremonial procession for which devotees wait for a whole year with bated breathe.

Lord Sudarshan was the first to venture out of the temple to get mingled in the sea of devotees who virtually compete with each other to touch the ‘tahias’. The lord was pulled by the servitors as per a specific process through the ‘Bada Danda’ (Grand Road) amid chants of ‘Haribol’ and ‘hulhul’ as a part of the practice and placed in the ‘Darpadalan’, the chariot of Goddess Subhadra.

Lord Sudarashn was followed by the elder brother Lord Balabhadra who was taken in grand procession to his chariot Taladhwaja amid beating of gongs and conches by creating a gripping spiritual atmosphere. The lord was seated atop his chariot subsequently.

The Pahandi of the Goddess Subhadra was started later involving the rhythmic swaying of the idol down the staircase of the temple comprising 22-steps and escorted by the servitors. The waiting devotees broke into the frenzied shout of ‘hulhul’ as soon as the Goddess came out of the temple. Swinging to the rhythm of bells the Goddess climbed atop her twelve-wheeler ‘Darpadalan’ chariot, literally known as the ‘trampler of pride’.

The ‘Pahandi’ of the cynosure and darling of the crowd Lord Jagannath’s has started shortly with servitors escorting the dusky lord amid a crowd jostling to have a glimpse of the deity and get the unbounded blessings from Him. As the lord Jagannath’s Pahandi is something for which the devotees wait for a period of one year, his spectacular procession with forward and backward movement with little pause left the crowd virtually out of control. Chanting of the lord’s name in chorus also filled a scintillating feeling in the atmosphere.

As per the prevailing ritual the chariot pulling would take place after completion of the ‘Chhera Pahanra’ (sweeping ritual) at the chariots by Gajapati king of Puri later in the day. The ritual is famous for its ‘golden broom’.