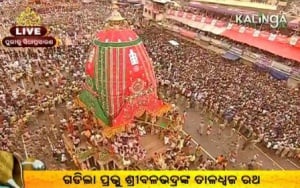 Puri: The pulling of Chariots of Lord Jagannath, Lord Balabhadra and Devi Subhadra began soon after the completion of the Chhera Panhara rituals.

Lakhs of devotees amid loud chants of Hari Bola, noises of conchs and ghantas, pulled the Taladhwaja Ratha of Lord Balabhadra first. After pulling it to some distance, they pulled Devi Subhadra’s Darpadalan (Debadalana) and finally the Nandighosa chariot of Lord Jagannath.

The cars were pulled at 4 PM, one and half-an-hour late than the stipulated time.

The rolling of the majestic chariots on the Bada Danda (Grand Road) begun after Puri Gajapati Dibyasingha Deb performed the Chhra Pahanra.

To prevent overcrowding in the chariots, SJTA has specifically fixed the number of sevayats for each chariot.

The devotees will not be allowed to climb atop on the chariots.

The chariots will be pulled to the Gundicha Temple, about three kilometres from the main temple and kept there for nine days and will return on Bahuda on July 3.