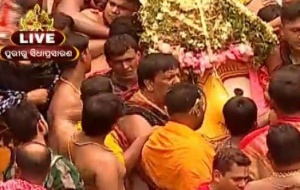 Ramchandra Dasmohapatra, the Badagrahi of Goddess Subhadra, alleged that some devotees touched Lord Balabhadra while the idol was being escorted to Chariot in Pahandi.

However, the temple administration denied the allegations. SJTA chief administrator Pradip Jena while talking on the matter said that there have been no irregularities and nobody has touched the deity.

As the news spread, two daitapatis namely Jagannath Swainmohapatra and Ramkrushna Dasmohapatra challenged the temple administration over the ban order imposed on touching the deities by devotees during the Ratha Jatra threatening to move Orissa High Court against such decision.

Earlier on June 23, the SJTA had issued a notice banning touching of the deities by devotees during Pahandi or atop chariots during Ratha Jatra. Besides, it had threatened to take penal action as per the law.