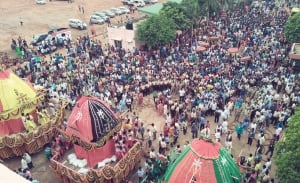 Bhubaneswar:Ratha Jatra was celebrated at Shrivani Khetra in the KISS premises on Sunday amid religious fervor and gaiety.

The Pahandi and other rituals like Mangala Arati, Mailama, Tadapalagi, Rosha Homa, Abakasha, Surya Puja, and chariot inauguration etc were followed by the procession of deities from the temple sanctum to the chariots in the morning as per the rituals of Mahaprabhu Shri Jagganath Temple of Puri.

Thousands of devotees gathered to pull the three chariots in the afternoon after Kamalakant Rout, temple Administrator, performed the holy ritual of Chhera Pahanra (ceremonial sweeping of the Chariots).

The special feature of Ghosayatra here is that Devadalan, the chariot of Goddess Subhadra, was pulled only by women. 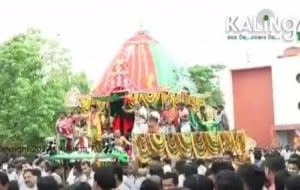 This year Dr. Achyuta Samanta, founder, KIIT Temple did not participate in any rituals of Temple because of the death of his mother last year.

However, he wished everyone a happy and prosperous Ratha Jatra. He also thanked the staff of the institute, especially K. K. Rout from KISS Temple Trust, who organized the celebrations very meticulously.

During the nine-day festival, there will be bhajan samaroh near the Gundicha temple every evening.