Rare tortoise with symbol of ‘Dasabatar’ on back found in Odisha’s Rayagada: Watch Rayagada: A rare tortoise has been spotted in Rayagada district of Odisha recently. The rarity of this peach coloured tortoise is that there is symbol of the 10 famous incarnations of Lord Vishnu on its back.

As per reports, the rare tortoise was rescued from near a Lord Shiva temple in Minajhola area under Chandrapur block of the district. A holy man named Janaka Nandan first spotted the tortoise. As he observed that the tortoise has symbol of the 10 incarnations on its back he rescued it and took to his Ashram. He made necessary arrangement for smooth bringing up of the creature. 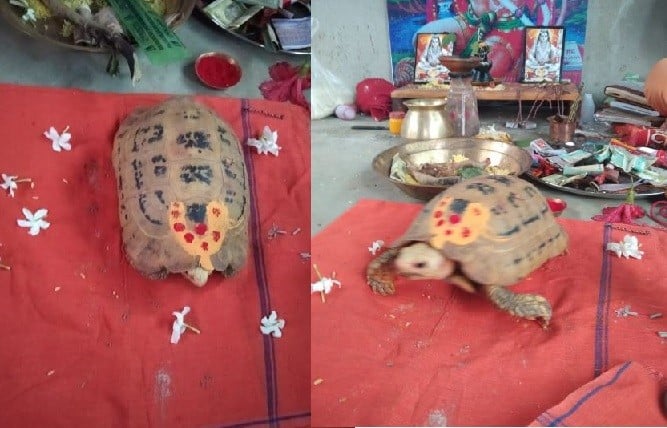 Following the incident, now many people are flocking to the place to witness the rare creature. Even, people are seen worshipping it.

The Lord Shiva shrine of Minajhola is an ancient temple and regarded as a famous place where devotees can fulfil their wishes by the grace of God. Hence, some devotees have thought it to be an incarnation of God.

WhatsApp: Avoid being added to an unwanted group by following these tips and tricks