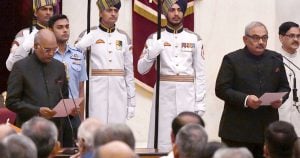 New Delhi: Rajiv Mehrishi on Monday took oath as the Comptroller and Auditor General (CAG) of India. He was administered the oath of office by President Ram Nath Kovind at Rashtrapati Bhavan here.

Mehrishi succeeded Shashi Kant Sharma and will be in office till August 7, 2020.

The President also shared the oath taking ceremony of CAG on the social media.

“Shri Rajiv Mehrishi sworn in as the Comptroller and Auditor-General of India at Rashtrapati Bhavan today”, he wrote in Twitter.

Shri Rajiv Mehrishi sworn in as the Comptroller and Auditor-General of India at Rashtrapati Bhavan today pic.twitter.com/CgfqMMiCey

Mehrishi, a 1978 batch IAS officer of the Rajasthan cadre, completed his two-year fixed term as the Home Secretary last month. He also served as Economic Affairs Secretary and Chief Secretary of Rajasthan.

The CAG is primarily entrusted with the responsibility of auditing the accounts of the Union government and of the state governments.